One more day until I leave Copenhagen and head home. The last three weeks have been long, yet quicker than I remember, and they’ve been busy, but I feel like I’ve barely done anything.  I think it was a great trip to have as a first trip – from finding bottles to pay for dinner to hunting for wooden giants, everything about my experience has taught me something. I met some people I will definitely keep in touch with, and I think I got a good idea of what it’s like to travel. Now, I just want to go see things, meet people, learn about places and people and cultures. I want to find places that aren’t your typical tourist or vacation spots and live there. I want to take the time to learn about these places and their people. I want to have experiences that I can share stories about and amuse people with, or inspire them to go explore and find these places for themselves.

I got to stand on the shoulders of giants – kinda. 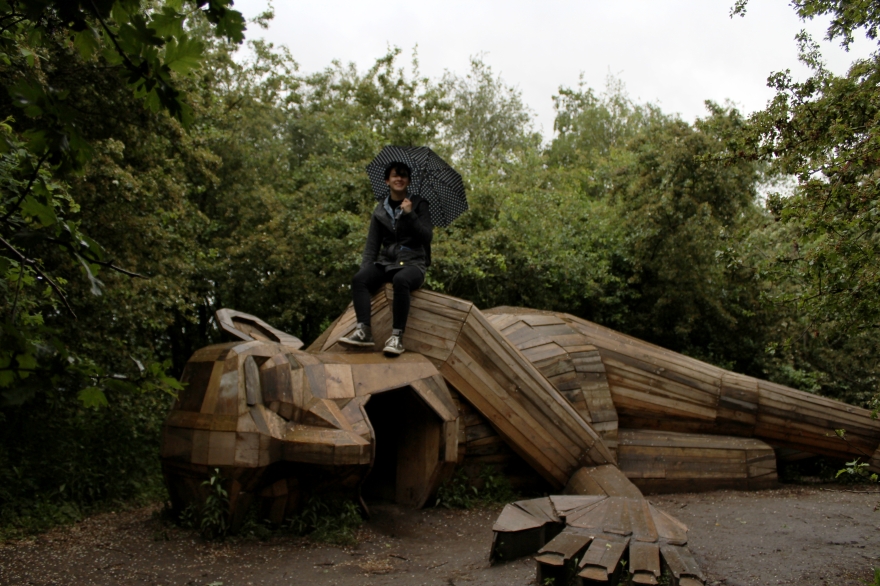 On Wednesday, I went giant hunting with our social and residential advisor, Mads. The first giant is about an hour away from where I was staying, so we headed out as soon as possible in the hopes of seeing all of them in a day.

We picked a bad day to go out, but a great day to go giant hunting.

We found the first one, Sleeping Louis, on top of a hill in Rødovre. (See photo above of me stepping on his face.) Since he was snoring and his mouth was wide open, we crawled inside – there’s room for two sleeping bags in there! Definitely not a lot of room, but certainly enough. From there, we walked about an hour south, talking about the intensity of science classes (Danish biology classes are exponentially more extensive, from what I’ve heard), differences in way of life, and your typical array of topics that get discussed when you’re wandering around in wind and rain looking for giants.

After walking for much longer than either of us anticipated, getting a little bit lost, and getting directions from some people nearby, we made it to the second wooden giant – Hill Top Trine. And, as with most large interactive public displays, both of us climbed up her arm to stand in her hands and appreciate the view in Hvidovre. (See photo below of Mads looking at a bunch of horses in the distance.) Because it was a cloudy day and it was probably around 8pm, we were losing light quickly. So, doing as any adventurers would do, we found the nearest train station and rode over to Ishøj instead of heading back. 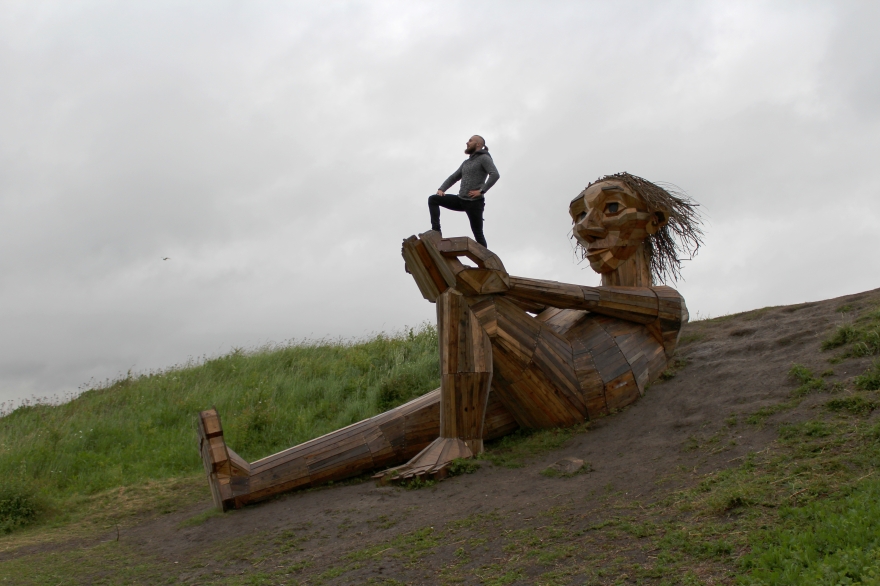 We arrived in Ishøj a little bit before 9pm with just enough time to grab some food at the nearest kebab place. As soon as we got our food, we headed out to find Oscar under the Bridge, the third giant that the clues led us to. It was about 10pm when we got there, and the winds were picking up. We hadn’t eaten yet, so we went down under the bridge and crouched in Oscar’s armpit to eat our food. The food was delicious, and the ambiance was… uh… phenomenal. As good as the environment of an armpit can be, even if it was a wooden one. From there, we decided to head back rather than go searching for the last three wooden giants. Thankfully, the rain held off long enough for us to get back to the train station.

Neither of us brought the right shoes, but I managed to keep my shoes pretty dry, unlike Mads… until I got back to my kollegium and I stepped in a deep puddle. I made fun of him for having wet feet, but apparently he’s good friends with karma. Overall, it was probably one of the coolest adventures I’ve had during my time in Copenhagen. Giant hunting is so much better than any normal site-seeing because there’s an element of adventure and if you go when the weather really sucks, it makes it that much more fun. And you don’t see many other people, which is nice.

I’m sitting in my room right now, telling this story in real time to one of the other American students that I met here and reflecting on this trip as a whole. Everyone was right when they said that it would go quickly – I’m looking back on my time here with such nostalgia and I haven’t even left yet. It’s about 2pm here now, so I’m going to take advantage of my last afternoon here this year and see one more place and take some more hipster photos in front of cool walls.